This post is going to be yet another part of the previous camera projects published on this blog. As described in the last post here in which i made Raspberry PI camera Sony IMX219 4 Lane MIPI CSI Board.

In this post will be having details about how to get data out of MIPI camera, make it useable and then feed data into Cypress FX3 USB3.0 controller. 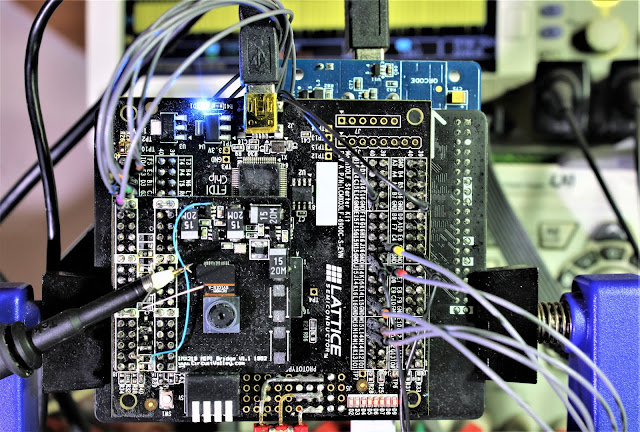 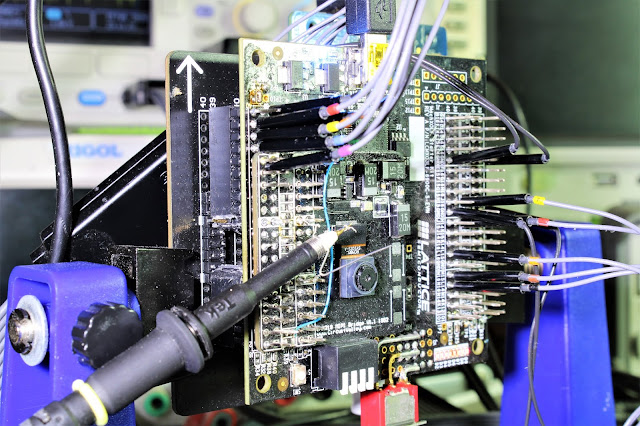 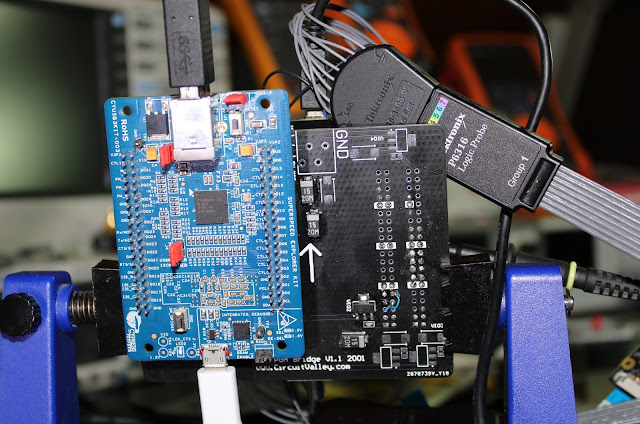 Camera module Directy connects to the FPGA Board and FPGA board Connects to Cypress FX3 FPGA board using this interconnect. There is not much in this PCB only few regulators for VCCIO
and length match 32bit 100Mhz bus for FPGA to FX3 Connection.

Bank IO for LVDS mipi HS receiver should be set to 2.5V and for LP should be 1.2 . Lattice FPGA board does not have any 2.5V bank regulator so this mounting 2.5V regulator on this board will provide bank io voltage. 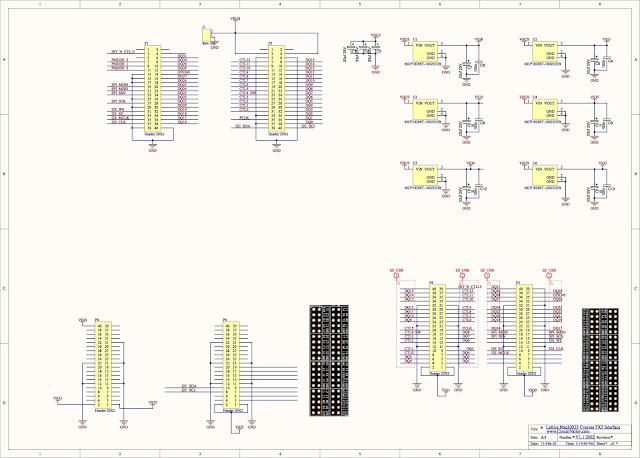 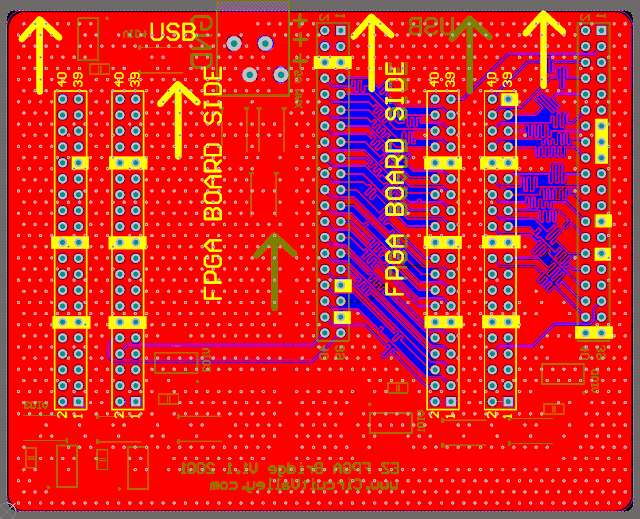 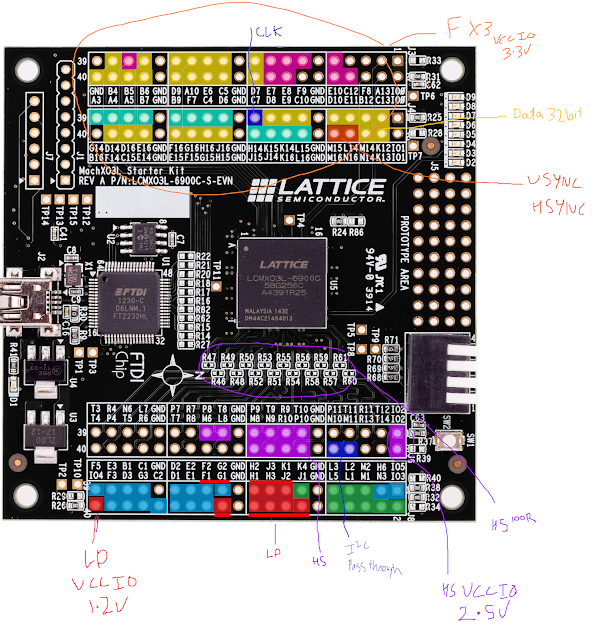 If used if my 4  Lane mipi csi-2 camera board version 1.1 1952, there is a bug in the interconnect PCB v1.1 2001, camera I2C sda and sck are interchanged, so if used with that specific camera PCB. interconnect board must be patched. You can see two thin blue wires coming out of the headers hole in one of images of back of the setup. Camera PCB is available on the camera page.


Details of Camera Module are published here in a previous post.

What is MIPI, you can google it to find out but basically it is a interface specification for Displays and Camera sensor to a application processor.

Image blow show block diagram of MIPI.  On one side there is application processor and other side is the peripheral. When peripheral is Camera and CSI apply. though mipi is closed specification which means one has to be member of MIPI consortium to gain access to full specification. And membership of the consortium comes with a big price tag for individuals. Luckily full specification is already available just a right keyword web search away. DCS, CCS, DSI, CSI and DPHY all the specification are available with just few minutes of web search. 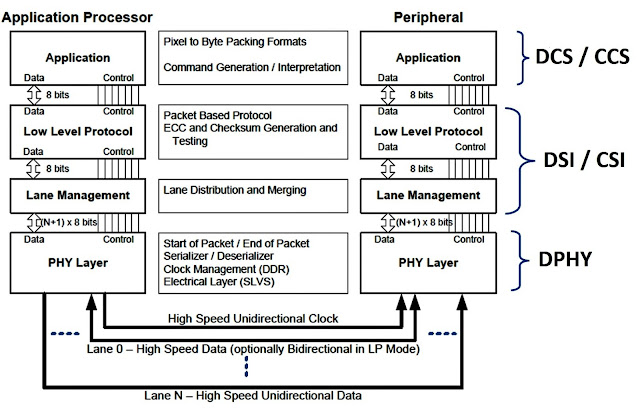 Basic transmitter only block diagram looks like in the image blow there is differential receiver for high speed data and two single ended LP receiver and CD receiver. 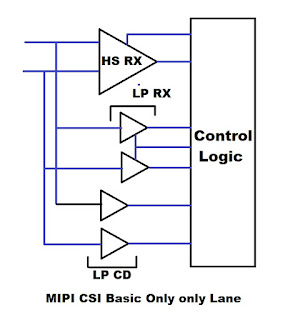 Very important fact with CCS when comparing with DCS , CCS describes command interface to be I2C while with DCS commands are set over same HS line as the data itself.
But in case of camera as per MIPI spec CCS is implemented over a extra I2C line.

Single Frame from camera is show in the image blow.

Camera send a Frame start packet
Then send embedded line information which tells receiver about the stream
Then image data line by line. 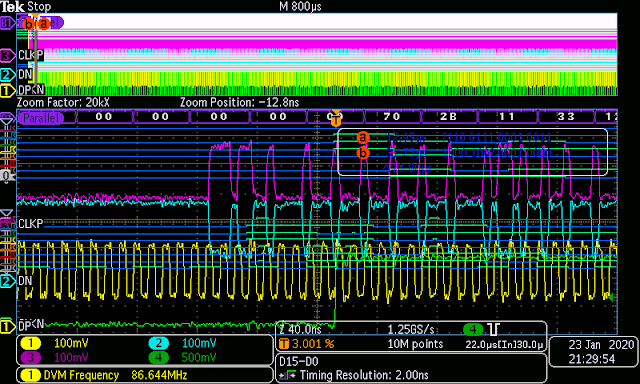 What make this camera sensor different to camera modules

What does this means for us as camera sensor implementer. As my final goal is to interface this camera to USB3.0 UVC with RAW YUV.  This camera does not output YUV, forget about YUV this will not even output RGB. Camera output is absolute RAW 10-bit ADC conversion result from the Bayer filtered sensor array.

So go first get RGB output from bayer raw data, a Debayer or demosaic need to be performed. Once demosaic is done we will have RGB ready to be converted to YUV. And one we have YUV it can be transmitted to USB to be displayed.

What next this camera will not have is any automatic control over exposure. because camera does not have any intelligence to know how dark  or bright scene is.  Solution to this problem what raspberry pi implement is , Raspberry Pi regularly on each frame update analog gain register over I2C to adjust gain according to how bright and dark scene is.

This camera does not have any white balance control as well so host must do correct while balance compensations. To get correct colors out of image.

FPGA block diagram is show in the image blow. This diagram describe how overall system is implemented and what the key components what this diagram does not describe is control signals and other miscellaneous stuff.

MIPI CSI Packet Decoder Basically a packet Stripper, removes header and footer from packet Takes lane aligned data from lane aligner @ mipi byte clock looks for specific packet type, in this case RAW10bit ( 0x2B). Module outputs Stripped bytes in exactly the way they were received. This module also fetch packet length and output_valid is active as long as input data is valid and received number of bytes is still within the limits of packet length.

Debayer / demosaic Takes 4x10bit pixel from RAW10 depacker module @mipi byte clock output 4x24bit RGB for each pixel , output is delayed by 2 lines Implement Basic Debayer filter, As debayer need pixel infrom neighboring pixel which may be on next or previous display line, so input data is written onto RAM, only 4 lines are stored in RAM at one time and only three of the readable at any give time , RAM to which data is written to can not be read. As we have enough info in RAM 4 10bit pixel will be coverted to 4x24bit RGB output First line is expected to BGBG , second line GRGR Basically BGGR format

Debayer / demosaic  Need little more attention than other modules , IMX219 datasheet incorrectly mention output as to be either GBRG or RGGB.

But after wasting lots of time it turned out camera output BGGR .  IMX219 Camera only output BGGR as defined by the IMX219 Driver in linux repo MEDIA_BUS_FMT_SBGGR10_1X10,  Camera datasheet incrorrectly defines output as RGGB and GBRG. Data sheet is incorrect in this case.
To test my debayer i was using built in camera test patterns. One key thing about IMX219 is Bayer filter type does affect test pattern as well. It seems like in Test pattern mode it outputs RGGB instead of BGGR. Test pattern will have R and B channel inverted when image have right color.

Update: I have discussed this issue with raspberry pi , It turned out flipping image seems to be the solution, once image flipped bayer output it correct for both data from sensor and test pattern. because flipping image does not affect bayer order of the test pattern. 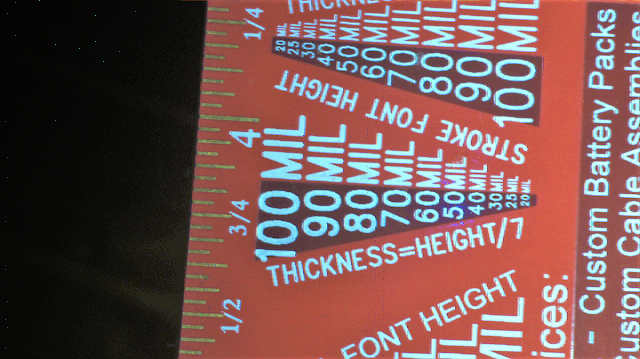 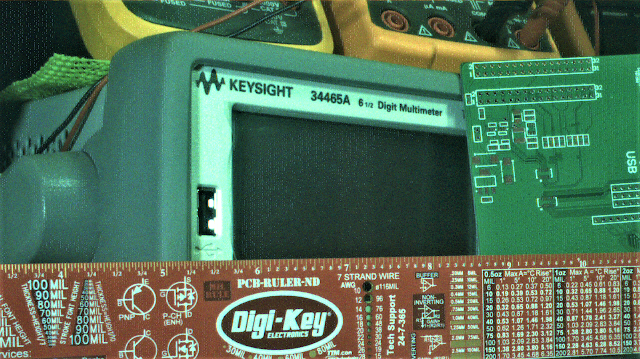 
Firmware implementation with FX3 was quite easy. I have put all the resolution and framerate in the USB descriptor , As described earlier this type of camera sensors are quite bare bone all the have sensor element, PLLs and ADC . So this camera sensor does not have any control over exposure, White-balance or even brightness, I have implemented manual control over USB UVC control channel. it possible to completely control camera exposure and brightness.

One more thing is though Cypress CYUSB3014 has 512KB RAM but only 224 KB and additional 32KB is available for DMA buffer.

UVC is implemented to support on the fly switching to any listed frame rate and resolution. 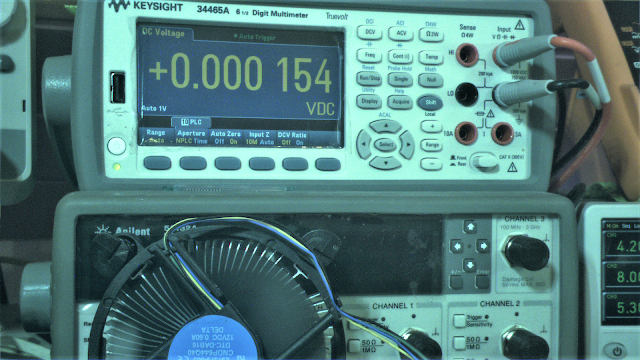 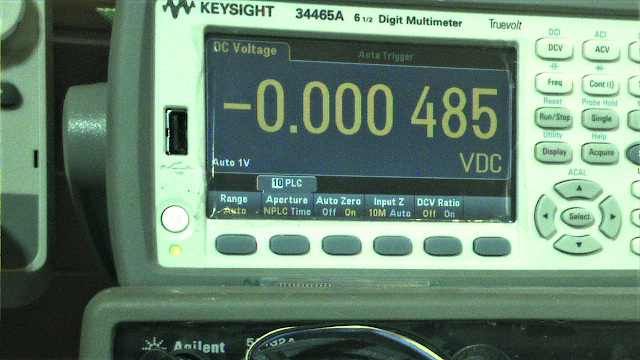 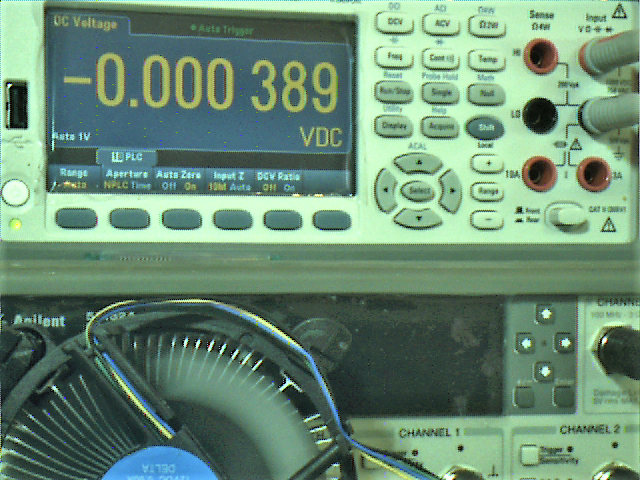 Lowest hanging fruit for optimization is output refromatter module in FPGA Right now FPGA YUV output is running at full 100Mhz ( which is driven by 200Mhz mipi clock /2 ) but output is fragmented and does not take full advantage of 100Mhz FX3 bus. If i would make a FIFO in reformatter we can de-couple MIPI clock and FPGA output. which make possible to run MIPI clock faster than 200Mhz. Wich ultimately makes it possible to get even faster frame rate, i have seen frame rate @ 640×80 to upto 1500 FPS when i ran MIPI clock faster form 270 to 320Mhz. Hardware in the current state may hinder reaching high MIPI frequency. May need to have custom FPGA board with correctly terminated CSI lanes.

Second optimization would be again in same reformatter but little complicated. buffer a lot more data and utilze 100 % of 32bit FX3 Bus. In theory one can utlize some other USB controller and get all bandwidth what USB 3.0 allow.

Next part of this project is going to Next Raspberry Pi camera IMX477 Camera to FPGA.
Source Files

PCB and Schematic Source is available in the Github Repo.